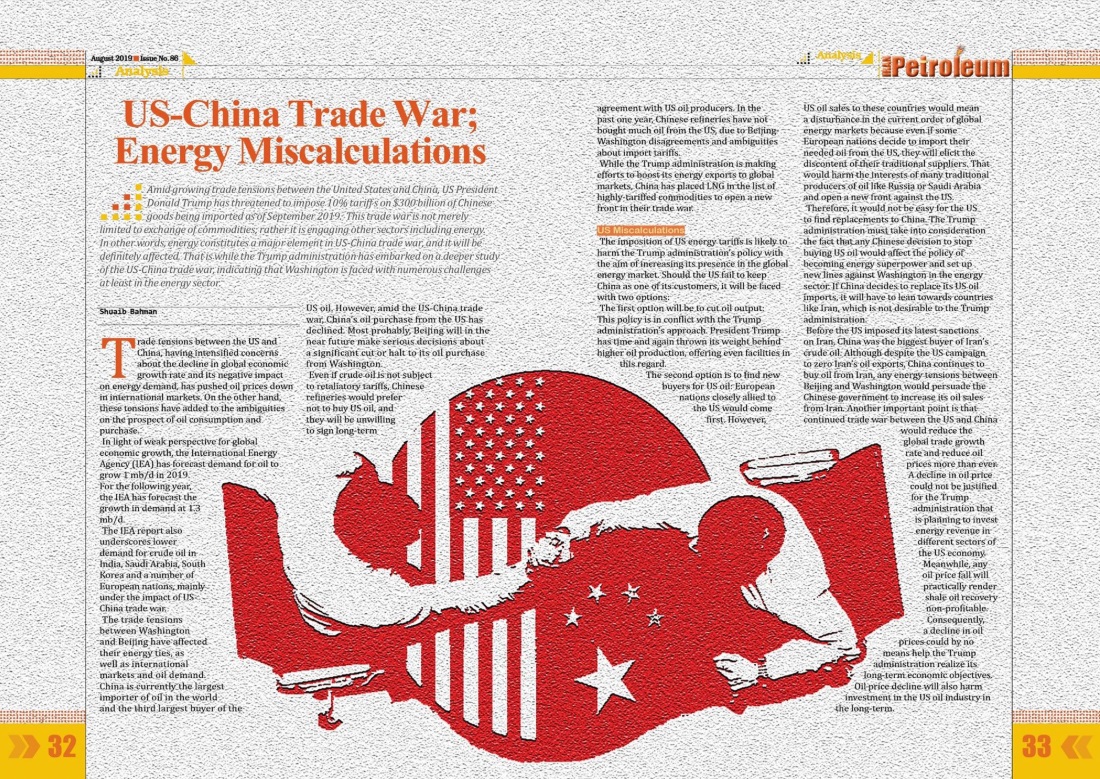 Amid growing trade tensions between the United States and China, US President Donald Trump has threatened to impose 10% tariff s on $300 billion of Chinese goods being imported as of September 2019.

This trade war is not merely limited to exchange of commodities; rather it is engaging other sectors including energy. In other words, energy constitutes a major element in US-China trade war, and it will be definitely affected. That is while the Trump administration has embarked on a deeper study of the US-China trade war, indicating that Washington is faced with numerous challenges at least in the energy sector.

Impact on Energy
Trade tensions between the US and China, having intensified concerns about the decline in global economic growth rate and its negative impact on energy demand, has pushed oil prices down in international markets. On the other hand, these tensions have added to the ambiguities on the prospect of oil consumption and purchase.

In light of weak perspective for global economic growth, the International Energy Agency (IEA) has forecast demand for oil to grow 1 mb/d in 2019. For the following year, the IEA has forecast the growth in demand at 1.3 mb/d.

The IEA report also underscores lower demand for crude oil in India, Saudi Arabia, South Korea and a number of European nations, mainly under the impact of US-China trade war.

The trade tensions between Washington and Beijing have affected their energy ties, as well as international markets and oil demand. China is currently the largest importer of oil in the world and the third largest buyer of the US oil. However, amid the US-China trade war, China’s oil purchase from the US has declined. Most probably, Beijing will in the near future make serious decisions about a significant cut or halt to its oil purchase from Washington.

Even if crude oil is not subject to retaliatory tariffs, Chinese refineries would prefer not to buy US oil, and they will be unwilling to sign long-term agreement with US oil producers. In the past one year, Chinese refineries have not bought much oil from the US, due to Beijing-Washington disagreements and ambiguities about import tariffs.

While the Trump administration is making efforts to boost its energy exports to global markets, China has placed LNG in the list of highly-tariffed commodities to open a new front in their trade war.

US Miscalculations
The imposition of US energy tariffs is likely to harm the Trump administration’s policy with the aim of increasing its presence in the global energy market. Should the US fail to keep China as one of its customers, it will be faced with two options:

The first option will be to cut oil output: This policy is in conflict with the Trump administration’s approach. President Trump has time and again thrown its weight behind higher oil production, offering even facilities in this regard.

The second option is to find new buyers for US oil: European nations closely allied to the US would come first. However, US oil sales to these countries would mean a disturbance in the current order of global energy markets because even if some European nations decide to import their needed oil from the US, they will elicit the discontent of their traditional suppliers. That would harm the interests of many traditional producers of oil like Russia or Saudi Arabia and open a new front against the US.

Therefore, it would not be easy for the US to find replacements to China. The Trump administration must take into consideration the fact that any Chinese decision to stop buying US oil would affect the policy of becoming energy superpower and set up new lines against Washington in the energy sector. If China decides to replace its US oil imports, it will have to lean towards countries like Iran, which is not desirable to the Trump administration.

Before the US imposed its latest sanctions on Iran, China was the biggest buyer of Iran’s crude oil. Although despite the US campaign to zero Iran’s oil exports, China continues to buy oil from Iran, any energy tensions between Beijing and Washington would persuade the Chinese government to increase its oil sales from Iran.

Another important point is that continued trade war between the US and China would reduce the global trade growth rate and reduce oil prices more than ever. A decline in oil price could not be justified for the Trump administration that is planning to invest energy revenue in different sectors of the US economy.

Meanwhile, any oil price fall will practically render shale oil recovery non-profitable. Consequently, a decline in oil prices could by no means help the Trump administration realize its long-term economic objectives. Oil price decline will also harm investment in the US oil industry in the long-term.