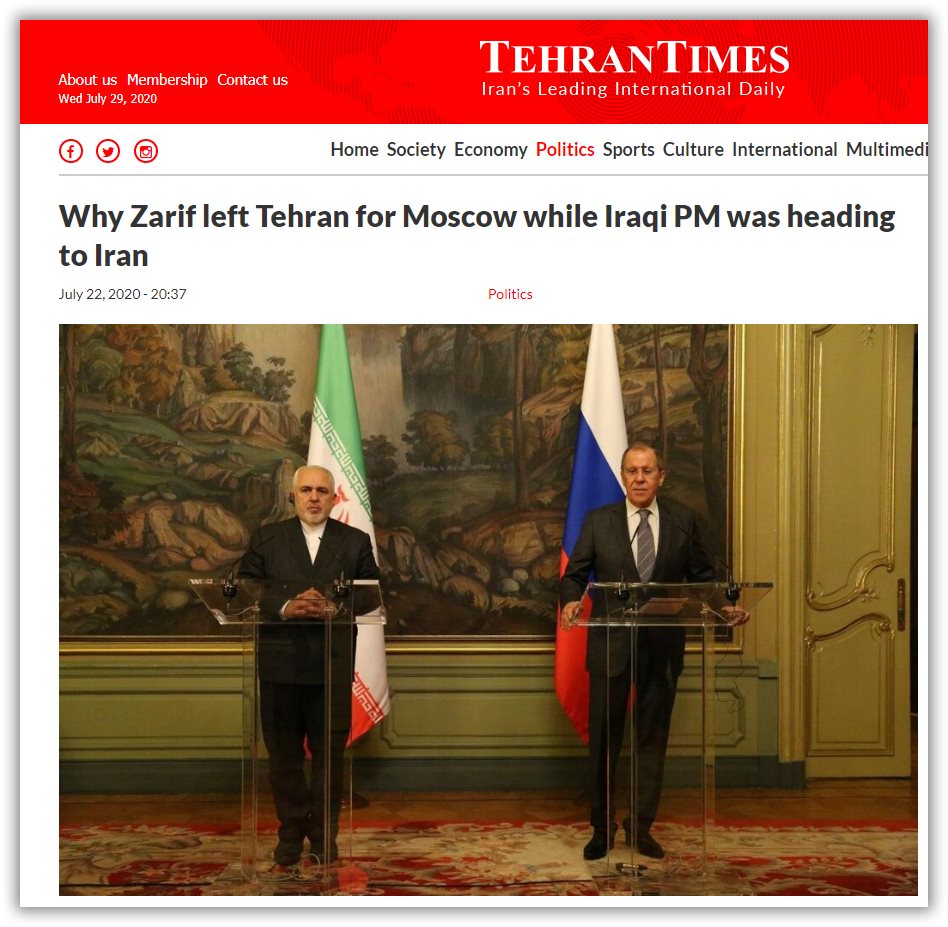 However, one senior official was remarkably absent from the talks that were held between Iranian and Iraqi delegations: Foreign Minister Mohammad Javad Zarif.
He was absent, because was not in Tehran.

As the Iraqi prime minister boarded his flight in Baghdad at about 12:00 pm for Tehran, the chief Iranian diplomat’s plane had already taken off from Tehran to Moscow.

Heading a big politico-economic delegation, al-Kadhimi arrived in Tehran on Tuesday noon to discuss a variety of bilateral issues such as expanding the volume of border trade and deepening political and security ties.

Considering that the Iraqi foreign minister was visiting Iran, Zarif was expected to be in Tehran to hold talks with his Iraqi counterpart, because two days earlier he had been on a tour of Baghdad that included several meetings with Iraqi military and political officials, and that he may have been in need of following up on the understandings he reached in Baghdad.

But it seems that discussions in Moscow were so important to Zarif that he left Tehran on the same day the Iraqi prime minister was making a visit to Iran that Rouhani later called a “turning point” in Iran-Iraq ties.

Analysts believe that three reasons may have been behind Zarif’s trip to Moscow.

First reason has to do with the 2015 nuclear deal between Iran and world powers, officially known as the Joint Comprehensive Plan of Action (JCPOA). At the end of his visit to Russia, Zarif said that the JCPOA was one of the most important issues he discussed in Moscow.

The JACOA has been on life support since Donald Trump pulled his country out of it on May 8, 2018. The U.S. is also working to extend the UN arms embargo on Iran, which is scheduled to expire in October. While the European signatories to the deal –France, Germany and the UK- continue to send mixed signals on the arms embargo, Russia and China firmly oppose the U.S. efforts in this regard. Zarif has said that Russia has taken a “very appropriate stance” on the U.S. policies against the JCPOA. He also said that he delivered an “important message” from President Rouhani to Russian President Vladimir Putin. The top diplomat said both Tehran and Moscow had “identical views” on the nuclear deal.

Second, Zarif discussed extending a decades-long treaty between Iran and Russia, which is about to expire. The treaty was signed on 12 March 2010 between the two countries for a period of 10 years. But it was extended twice. Zarif said the treaty needs to be updated in a way that keep up with the developments that have been achieved in Iran-Russia relations during the past two decades.

Iran and China are also negotiating to finalize the text of a comprehensive strategic partnership.
“Iran and Russia are pursuing a greater plan to draft a strategic document that could shape their relations for the years to come,” Dr. Shuaib Bahman, a Russia expert, told the Tehran Times.

Bahman said that Zarif discussed many issues of mutual significance such as the JCPOA and regional developments during his visit to Moscow, but the main purpose of his visit was to draft this document.

Syria could well be the third reason behind the Zarif trip to Moscow.
“Regional issues such as Syria, Afghanistan and Yemen are very important to us, and we had the opportunity to hold talks in this regard,” Iran’s chief diplomat said at the end of his visit to Russia.

He also said that he had a “very good” discussions with his Russian counterpart.

In his new, controversial book titled “The Room Where It Happened: A White House Memoir”, Bolton claimed that Putin told him during their meeting in the Kremlin in June 2018 that Moscow was not interested in Iran’s presence in Syria. This claim may have raised some concerns in Tehran. Even if it was not true, it could have played into the hands of some regional players, who are eager to drive a wedge between Iran and Russia in Syria, or at least use the claims made by Bolton to create a sense of Iranian-Russian disagreement over Syria through media campaigns.

But the Russian foreign minister told the news conference after holding talks with Zarif that Putin could have never said that Moscow doesn’t need Iran in Syria, because he is not in the habit of discussing such matters behind his partners’ back.

“[Bolton] had no grounds to quote President Putin (that Russia allegedly doesn’t want Iran’s presence in Syria) because Putin has never said anything of the kind,” the TASS news agency quoted Lavrov as saying on Tuesday. “It is against our traditions and principles, the more so it is against President Putin’s principles, to discuss such things behind the back of our partners, we are tightly cooperating with Turkey and Iran in Syria.”

Zarif said that he doesn’t believe Bolton’s claims either.
“We think it has nothing to do with the real state of things and the level of cooperation Iran maintains with Russia and Turkey in the interests of peace, stability and accord in Syria,” Zarif said.

Analysts believe that Iran-Russia ties are so strong that allegations, like what Bolton said, cannot undermine them.
Bahman said that Iran and Russia have a very close cooperation in Syria.

“The U.S. hegemony in the region is being weakened. Instead, regional cooperation is being strengthened. World powers like Russia and China want to have a close cooperation with Iran. Because in issues like international peace and stability, free trade as well as combating terrorism, Iran has reached a position that world powers like China and Russia see the cooperation with Iran as a way to secure their interests,” Hassan Kazemi Qomi, Iran’s ambassador to Iraq, told the Tehran Times.