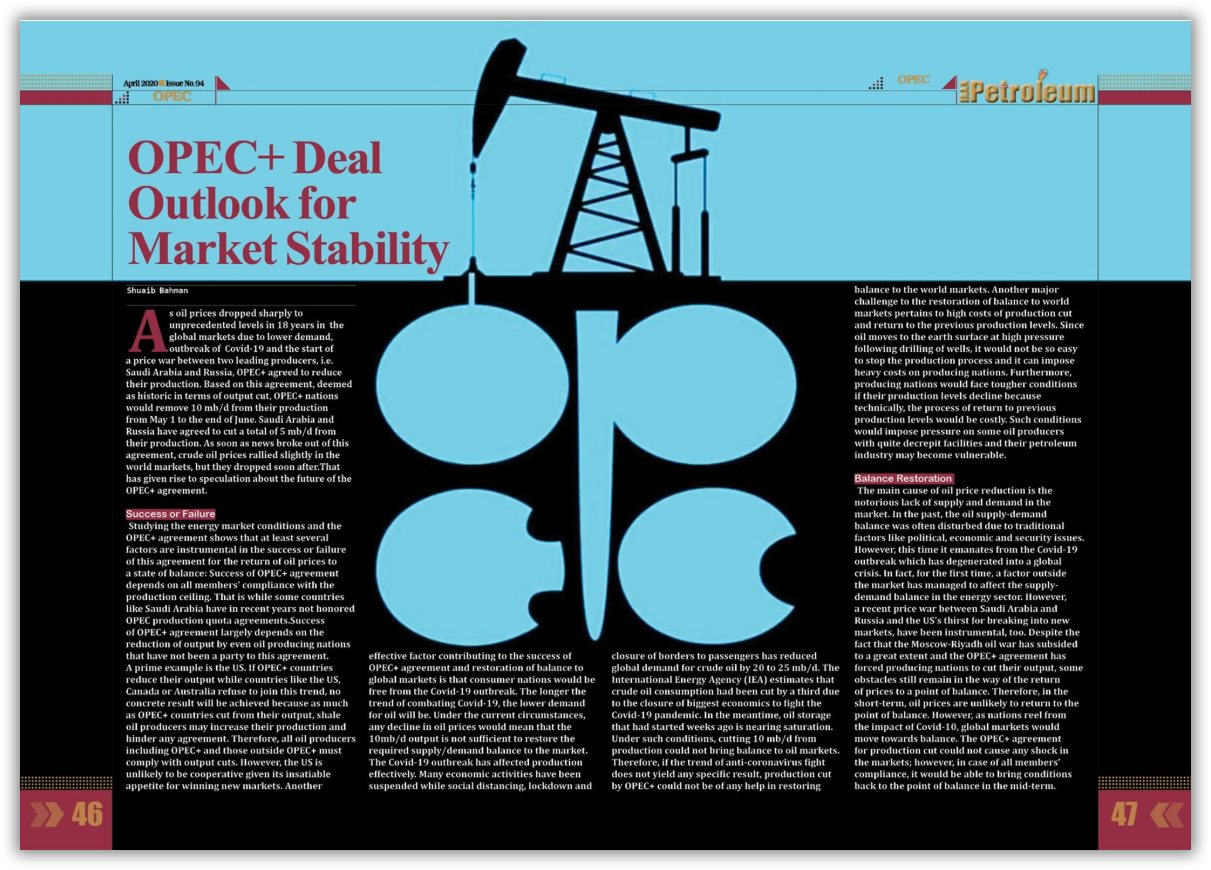 The oil price slump in global markets has posed a new challenge to all producers, including the US. Furthermore, in a rare event, the West Texas Intermediate (WTI) base price for delivery in the future went down to the negative territory. US President Donald Trump announced in reaction to the negative oil prices that the government would take this chance to purchase 75 million barrels of crude oil, but the US’s Strategic Petroleum Reserve (SPR) is now holding 700 million barrels and there is no extra capacity for storage.

The negative prices also showed how saturated the market was and to what extent the US economy has slowed down. That has given rise to speculation about the US’s future orientations in the global oil market and acceptance of oil production restrictions.

OPEC+ oil and energy ministers met through videoconference. Before their talks, Us President Donald Trump had called on Russian President Vladimir Putin and Saudi Crown Prince Mohammad bin Salman to cut their output. The US has called on other nations to cut their production, while its own cooperation with the OPEC+ deal is still in doubt.

On one hand, the US has set its energy strategy based on developing oil and gas exports, thereby seeking new markets. Based on such a strategy, when the power of production and exports by rivals declines, the US would have more space for energy supply. Therefore, any reduction in production by traditional oil producers would be a golden opportunity for the US to win more market shares.

However, global market conditions have become too complicated to let the US benefit from the reduction of output by other countries in its own interest. Due to high costs of shale oil production, the US would suffer even more than other producers from the oil price decline. Shale oil production costs on average $40 a barrel and selling it at a price below this level could not even cover production costs. Therefore, the persistence of this trend in the long term could push the petroleum industry and investors in the US energy sector to bankruptcy.

Therefore, the US’s strategy for export development remains fragile. If it decides to insist on its boosting its export volume, the energy price would never return to the point of balance, which would threaten shale oil production in the country. Moreover, in the run-up to November’s presidential election, such an approach would pose a major challenge to President Trump’s reelection bid. Trump is already under pressure due to his mismanagement of the Covid-19 outbreak and the death of many Americans. He is also blamed by rival Democrats for the loss of about 25 million jobs in the US. Under such circumstances, a reduction in oil prices while shale production costs remain high would not only disappoint shale industry owners, but also it would further spread the unemployment trend in the US petroleum sector. That would on one hand call into question Trump’s strategy for developing energy exports, while on the other it would cause more discontent. Any decision to reduce shale oil production would make the US more dependent on foreign resources, which would be in conflict with Washington’s strategy of energy independence that has been branded in recent years as a breakthrough by President Trump.

Under circumstances wherein the Trump administration cannot benefit from the reduction of oil production by other countries, nor is it able to reduce its own output, it has to take into account the following two points:

First, the US administration would have to adopt supportive policies and present financial packages to the petroleum industry and workers in order to get out of the current situation of the petroleum industry. Based on a plan prepared by the US administration to prevent the closure of drilling rigs and stop job losses in the shale industry, it is to loan these companies.

Second, the Trump administration is required to have a long-term fundamental plan for its important rivals in global markets. The strategy of pushing out rivals like Iran through zeroing oil exports and/or imposing sanctions against Venezuela and fanning the flames of tensions in Libya may in the short term expand the US consumer market; however, the US would need bigger markets like Europe in its export development strategy. Undoubtedly, the US’s main rival in this market is Russia that was recently engaged in an oil price war with Saudi Arabia in order to punish the Saudis and at the same time restrict US oil production.

Energy is set to enter as a new element to the bones of contention between the US and Russia, particularly in the Europe zone. The Americans would have to find a solution for countering Russia’s energy policies.