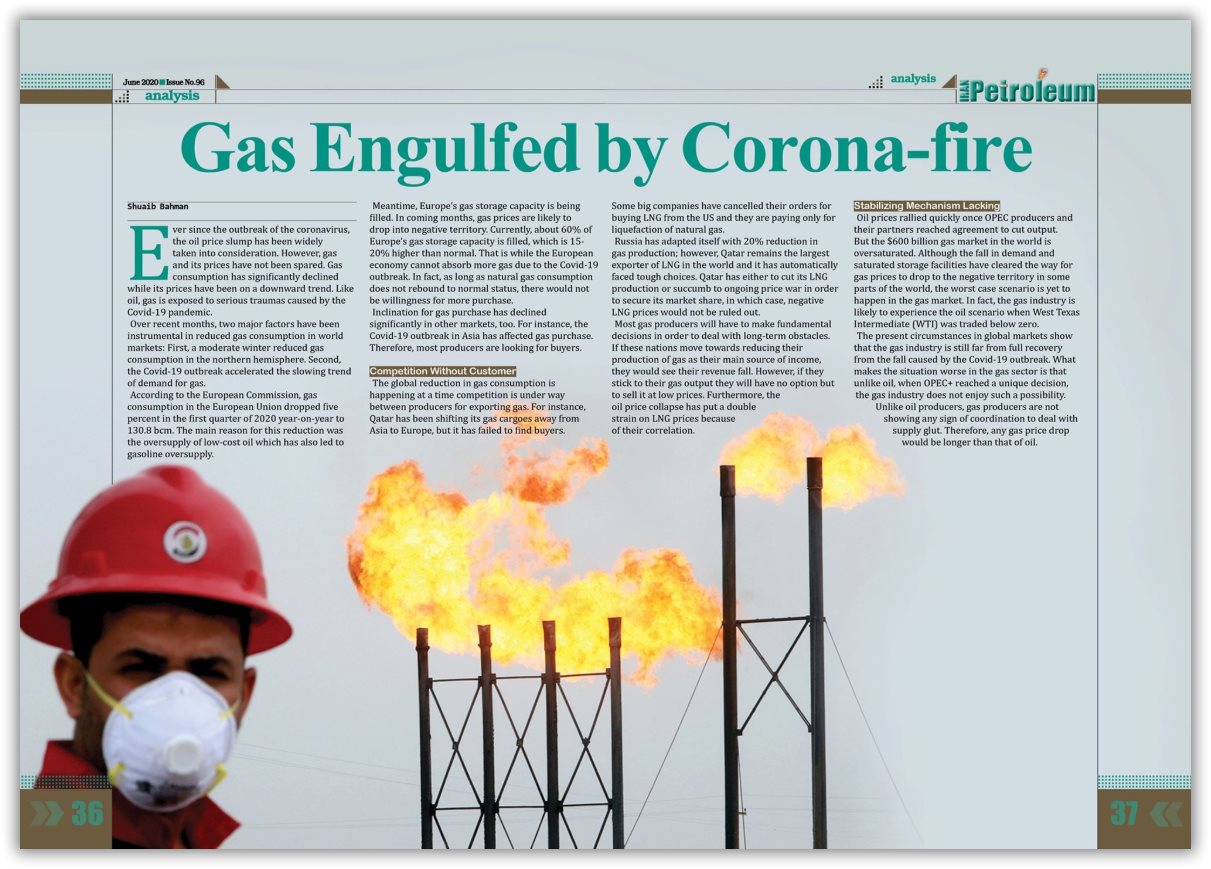 Ever since the outbreak of the coronavirus, the oil price slump has been widely taken into consideration. However, gas and its prices have not been spared. Gas consumption has significantly declined while its prices have been on a downward trend. Like oil, gas is exposed to serious traumas caused by the Covid-19 pandemic.

According to the European Commission, gas consumption in the European Union dropped five percent in the first quarter of 2020 year-on-year to 130.8 bcm. The main reason for this reduction was the oversupply of low-cost oil which has also led to gasoline oversupply.

Meantime, Europe’s gas storage capacity is being filled. In coming months, gas prices are likely to drop into negative territory. Currently, about 60% of Europe’s gas storage capacity is filled, which is 15-20% higher than normal. That is while the European economy cannot absorb more gas due to the Covid-19 outbreak. In fact, as long as natural gas consumption does not rebound to normal status, there would not be willingness for more purchase.

Inclination for gas purchase has declined significantly in other markets, too. For instance, the Covid-19 outbreak in Asia has affected gas purchase. Therefore, most producers are looking for buyers.

The global reduction in gas consumption is happening at a time competition is under way between producers for exporting gas. For instance, Qatar has been shifting its gas cargoes away from Asia to Europe, but it has failed to find buyers. Some big companies have cancelled their orders for buying LNG from the US and they are paying only for liquefaction of natural gas.

Russia has adapted itself with 20% reduction in gas production; however, Qatar remains the largest exporter of LNG in the world and it has automatically faced tough choices. Qatar has either to cut its LNG production or succumb to ongoing price war in order to secure its market share, in which case, negative LNG prices would not be ruled out.

Most gas producers will have to make fundamental decisions in order to deal with long-term obstacles. If these nations move towards reducing their production of gas as their main source of income, they would see their revenue fall. However, if they stick to their gas output they will have no option but to sell it at low prices. Furthermore, the oil price collapse has put a double strain on LNG prices because of their correlation.

Oil prices rallied quickly once OPEC producers and their partners reached agreement to cut output. But the $600 billion gas market in the world is oversaturated. Although the fall in demand and saturated storage facilities have cleared the way for gas prices to drop to the negative territory in some parts of the world, the worst case scenario is yet to happen in the gas market. In fact, the gas industry is likely to experience the oil scenario when West Texas Intermediate (WTI) was traded below zero.

The present circumstances in global markets show that the gas industry is still far from full recovery from the fall caused by the Covid-19 outbreak. What makes the situation worse in the gas sector is that unlike oil, when OPEC+ reached a unique decision, the gas industry does not enjoy such a possibility. Unlike oil producers, gas producers are not showing any sign of coordination to deal with supply glut. Therefore, any gas price drop would be longer than that of oil.