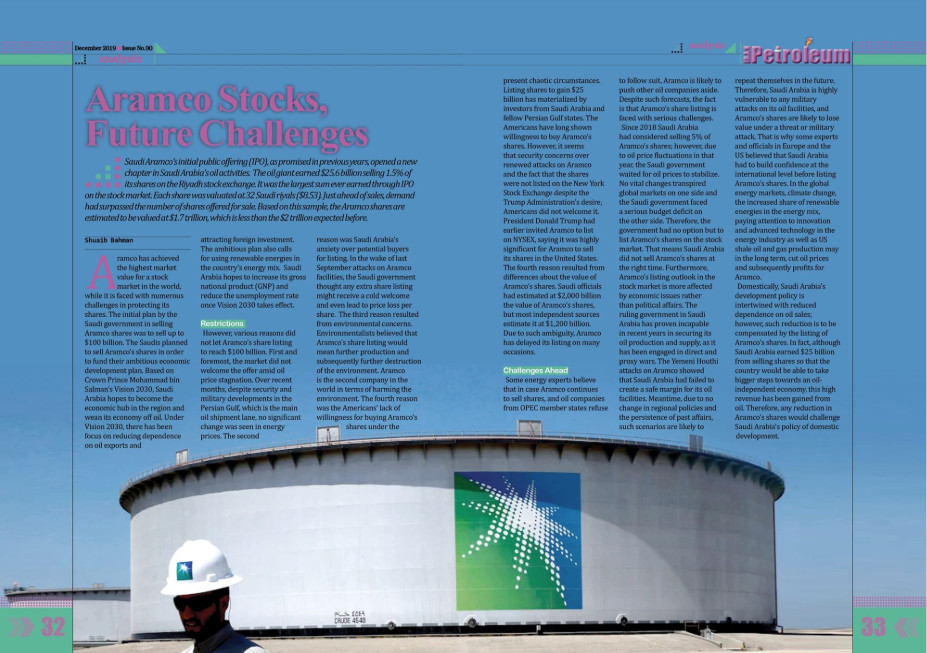 Dr. Shuaib Bahman
Saudi Aramco’s initial public offering (IPO), as promised in previous years, opened a new chapter in Saudi Arabia’s oil activities.
The oil giant earned $25.6 billion selling 1.5% of its shares on the Riyadh stock exchange. It was the largest sum ever earned through IPO on the stock market. Each share was valuated at 32 Saudi riyals ($8.53). Just ahead of sales, demand had surpassed the number of shares offered for sale. Based on this sample, the Aramco shares are estimated to be valued at $1.7 trillion, which is less than the $2 trillion expected before.
Aramco has achieved the highest market value for a stock market in the world, while it is faced with numerous challenges in protecting its shares.
The initial plan by the Saudi government in selling Aramco shares was to sell up to $100 billion. The Saudis planned to sell Aramco’s shares in order to fund their ambitious economic development plan. Based on Crown Prince Mohammad bin Salman’s Vision 2030, Saudi Arabia hopes to become the economic hub in the region and wean its economy off oil. Under Vision 2030, there has been focus on reducing dependence on oil exports and attracting foreign investment. The ambitious plan also calls for using renewable energies in the country’s energy mix.
Saudi Arabia hopes to increase its gross national product (GNP) and reduce the unemployment rate once Vision 2030 takes effect.
Restrictions
However, various reasons did not let Aramco’s share listing to reach $100 billion. First and foremost, the market did not welcome the offer amid oil price stagnation. Over recent months, despite security and military developments in the Persian Gulf, which is the main oil shipment lane, no significant change was seen in energy prices.
The second reason was Saudi Arabia’s anxiety over potential buyers for listing. In the wake of last September attacks on Aramco facilities, the Saudi government thought any extra share listing might receive a cold welcome and even lead to price loss per share.
The third reason resulted from environmental concerns. Environmentalists believed that Aramco’s share listing would mean further production and subsequently further destruction of the environment. Aramco is the second company in the world in terms of harming the environment.
The fourth reason was the Americans’ lack of willingness for buying Aramco’s shares under the present chaotic circumstances.
Listing shares to gain $25 billion has materialized by investors from Saudi Arabia and fellow Persian Gulf states. The Americans have long shown willingness to buy Aramco’s shares. However, it seems that security concerns over renewed attacks on Aramco and the fact that the shares were not listed on the New York Stock Exchange despite the Trump Administration’s desire, Americans did not welcome it. President Donald Trump had earlier invited Aramco to list on NYSEX, saying it was highly significant for Aramco to sell its shares in the United States.
The fourth reason resulted from differences about the value of Aramco’s shares. Saudi officials had estimated at $2,000 billion the value of Aramco’s shares, but most independent sources estimate it at $1,200 billion. Due to such ambiguity, Aramco has delayed its listing on many occasions.
Challenges Ahead
Some energy experts believe that in case Aramco continues to sell shares, and oil companies from OPEC member states refuse to follow suit, Aramco is likely to push other oil companies aside. Despite such forecasts, the fact is that Aramco’s share listing is faced with serious challenges.
Since 2018 Saudi Arabia had considered selling 5% of Aramco’s shares; however, due to oil price fluctuations in that year, the Saudi government waited for oil prices to stabilize. No vital changes transpired global markets on one side and the Saudi government faced a serious budget deficit on the other side. Therefore, the government had no option but to list Aramco’s shares on the stock market. That means Saudi Arabia did not sell Aramco’s shares at the right time.
Furthermore, Aramco’s listing outlook in the stock market is more affected by economic issues rather than political affairs. The ruling government in Saudi Arabia has proven incapable in recent years in securing its oil production and supply, as it has been engaged in direct and proxy wars.
The Yemeni Houthi attacks on Aramco showed that Saudi Arabia had failed to create a safe margin for its oil facilities. Meantime, due to no change in regional policies and the persistence of past affairs, such scenarios are likely to repeat themselves in the future. Therefore, Saudi Arabia is highly vulnerable to any military attacks on its oil facilities, and Aramco’s shares are likely to lose value under a threat or military attack.
That is why some experts and officials in Europe and the US believed that Saudi Arabia had to build confidence at the international level before listing Aramco’s shares.
In the global energy markets, climate change, the increased share of renewable energies in the energy mix, paying attention to innovation and advanced technology in the energy industry as well as US shale oil and gas production may in the long term, cut oil prices and subsequently profits for Aramco.
Domestically, Saudi Arabia’s development policy is intertwined with reduced dependence on oil sales; however, such reduction is to be compensated by the listing of Aramco’s shares. In fact, although Saudi Arabia earned $25 billion from selling shares so that the country would be able to take bigger steps towards an oil-independent economy, this high revenue has been gained from oil. Therefore, any reduction in Aramco’s shares would challenge Saudi Arabia’s policy of domestic development.
Iran Petroleum