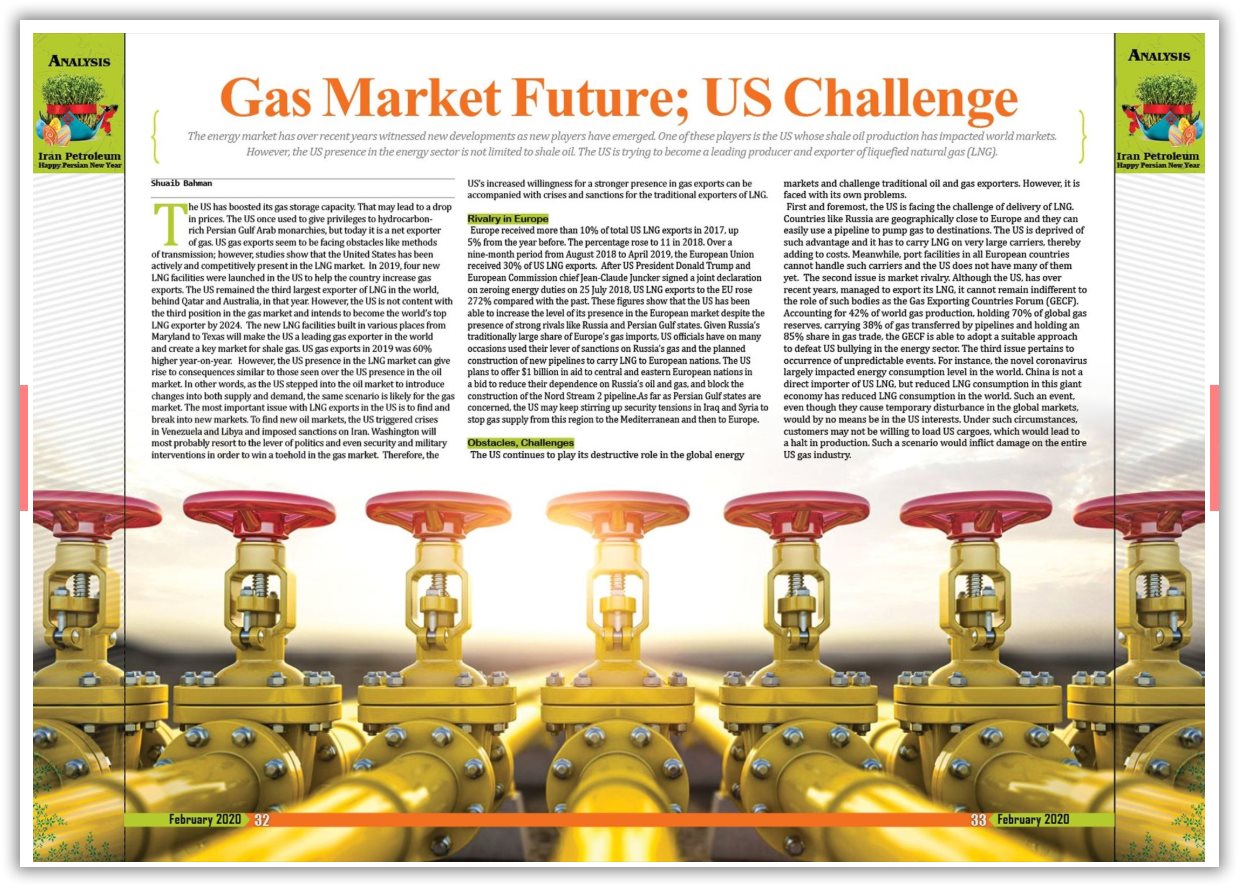 The energy market has over recent years witnessed new developments as new players have emerged. One of these players is the US whose shale oil production has impacted world markets.

However, the US presence in the energy sector is not limited to shale oil. The US is trying to become a leading producer and exporter of liquefied natural gas (LNG).

The US has boosted its gas storage capacity. That may lead to a drop in prices. The US once used to give privileges to hydrocarbon-rich Persian Gulf Arab monarchies, but today it is a net exporter of gas. US gas exports seem to be facing obstacles like methods of transmission; however, studies show that the United States has been actively and competitively present in the LNG market.

In 2019, four new LNG facilities were launched in the US to help the country increase gas exports. The US remained the third largest exporter of LNG in the world, behind Qatar and Australia, in that year. However, the US is not content with the third position in the gas market and intends to become the world’s top LNG exporter by 2024.

The new LNG facilities built in various places from Maryland to Texas will make the US a leading gas exporter in the world and create a key market for shale gas. US gas exports in 2019 was 60% higher year-on-year.

However, the US presence in the LNG market can give rise to consequences similar to those seen over the US presence in the oil market. In other words, as the US stepped into the oil market to introduce changes into both supply and demand, the same scenario is likely for the gas market. The most important issue with LNG exports in the US is to find and break into new markets. To find new oil markets, the US triggered crises in Venezuela and Libya and imposed sanctions on Iran. Washington will most probably resort to the lever of politics and even security and military interventions in order to win a toehold in the gas market.

Therefore, the US’s increased willingness for a stronger presence in gas exports can be accompanied with crises and sanctions for the traditional exporters of LNG.

After US President Donald Trump and European Commission chief Jean-Claude Juncker signed a joint declaration on zeroing energy duties on 25 July 2018, US LNG exports to the EU rose 272% compared with the past.

These figures show that the US has been able to increase the level of its presence in the European market despite the presence of strong rivals like Russia and Persian Gulf states.

Given Russia’s traditionally large share of Europe’s gas imports, US officials have on many occasions used their lever of sanctions on Russia’s gas and the planned construction of new pipelines to carry LNG to European nations.

The US plans to offer $1 billion in aid to central and eastern European nations in a bid to reduce their dependence on Russia’s oil and gas, and block the construction of the Nord Stream 2 pipeline.

As far as Persian Gulf states are concerned, the US may keep stirring up security tensions in Iraq and Syria to stop gas supply from this region to the Mediterranean and then to Europe.

The US continues to play its destructive role in the global energy markets and challenge traditional oil and gas exporters. However, it is faced with its own problems.

First and foremost, the US is facing the challenge of delivery of LNG. Countries like Russia are geographically close to Europe and they can easily use a pipeline to pump gas to destinations. The US is deprived of such advantage and it has to carry LNG on very large carriers, thereby adding to costs. Meanwhile, port facilities in all European countries cannot handle such carriers and the US does not have many of them yet.

The second issue is market rivalry. Although the US, has over recent years, managed to export its LNG, it cannot remain indifferent to the role of such bodies as the Gas Exporting Countries Forum (GECF). Accounting for 42% of world gas production, holding 70% of global gas reserves, carrying 38% of gas transferred by pipelines and holding an 85% share in gas trade, the GECF is able to adopt a suitable approach to defeat US bullying in the energy sector.

Such an event, even though they cause temporary disturbance in the global markets, would by no means be in the US interests. Under such circumstances, customers may not be willing to load US cargoes, which would lead to a halt in production. Such a scenario would inflict damage on the entire US gas industry.