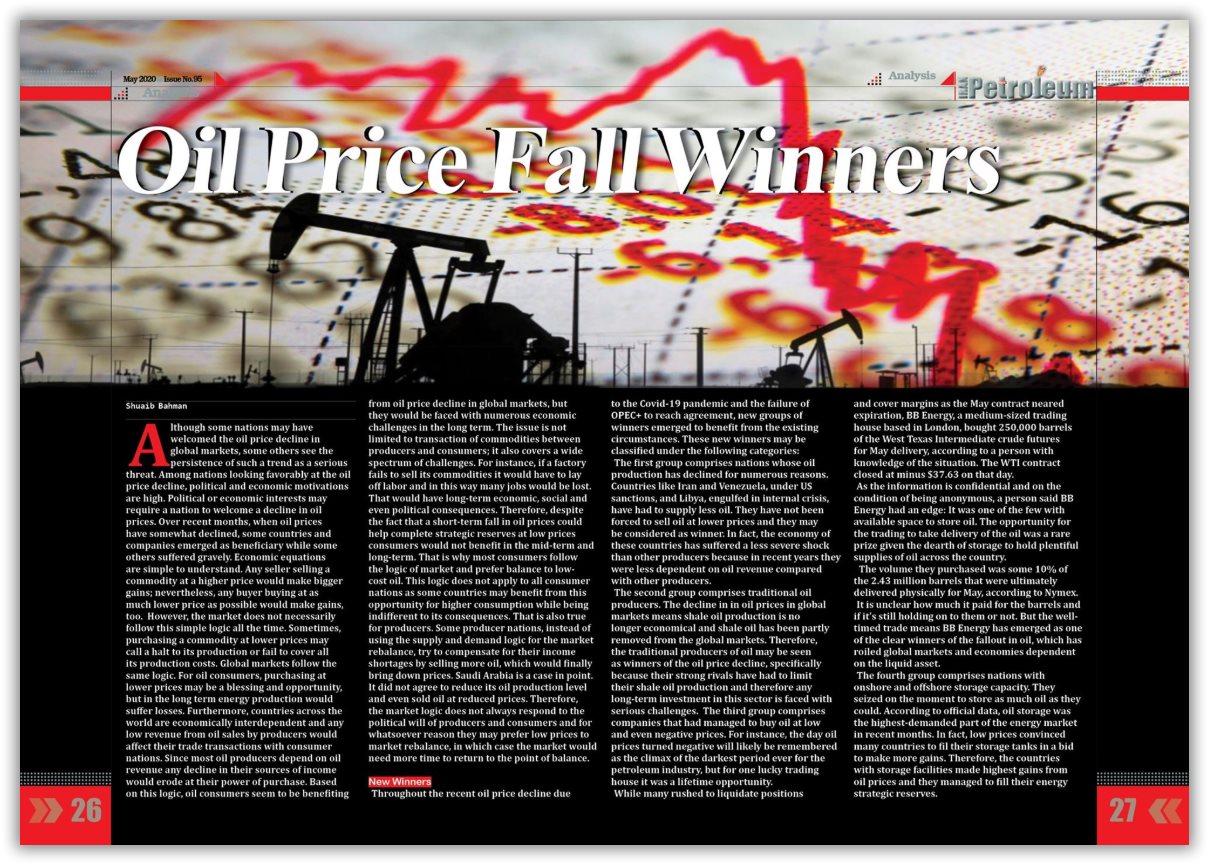 Although some nations may have welcomed the oil price decline in global markets, some others see the persistence of such a trend as a serious threat. Among nations looking favorably at the oil price decline, political and economic motivations are high. Political or economic interests may require a nation to welcome a decline in oil prices. Over recent months, when oil prices have somewhat declined, some countries and companies emerged as beneficiary while some others suffered gravely.

Economic equations are simple to understand. Any seller selling a commodity at a higher price would make bigger gains; nevertheless, any buyer buying at as much lower price as possible would make gains, too.

However, the market does not necessarily follow this simple logic all the time. Sometimes, purchasing a commodity at lower prices may call a halt to its production or fail to cover all its production costs. Global markets follow the same logic. For oil consumers, purchasing at lower prices may be a blessing and opportunity, but in the long term energy production would suffer losses. Furthermore, countries across the world are economically interdependent and any low revenue from oil sales by producers would affect their trade transactions with consumer nations. Since most oil producers depend on oil revenue any decline in their sources of income would erode at their power of purchase.

Based on this logic, oil consumers seem to be benefiting from oil price decline in global markets, but they would be faced with numerous economic challenges in the long term. The issue is not limited to transaction of commodities between producers and consumers; it also covers a wide spectrum of challenges. For instance, if a factory fails to sell its commodities it would have to lay off labor and in this way many jobs would be lost. That would have long-term economic, social and even political consequences.

Therefore, despite the fact that a short-term fall in oil prices could help complete strategic reserves at low prices consumers would not benefit in the mid-term and long-term. That is why most consumers follow the logic of market and prefer balance to low-cost oil. This logic does not apply to all consumer nations as some countries may benefit from this opportunity for higher consumption while being indifferent to its consequences. That is also true for producers. Some producer nations, instead of using the supply and demand logic for the market rebalance, try to compensate for their income shortages by selling more oil, which would finally bring down prices. Saudi Arabia is a case in point. It did not agree to reduce its oil production level and even sold oil at reduced prices.

Therefore, the market logic does not always respond to the political will of producers and consumers and for whatsoever reason they may prefer low prices to market rebalance, in which case the market would need more time to return to the point of balance.

Throughout the recent oil price decline due to the Covid-19 pandemic and the failure of OPEC+ to reach agreement, new groups of winners emerged to benefit from the existing circumstances.

These new winners may be classified under the following categories:

The first group comprises nations whose oil production has declined for numerous reasons. Countries like Iran and Venezuela, under US sanctions, and Libya, engulfed in internal crisis, have had to supply less oil. They have not been forced to sell oil at lower prices and they may be considered as winner. In fact, the economy of these countries has suffered a less severe shock than other producers because in recent years they were less dependent on oil revenue compared with other producers.

The second group comprises traditional oil producers. The decline in in oil prices in global markets means shale oil production is no longer economical and shale oil has been partly removed from the global markets. Therefore, the traditional producers of oil may be seen as winners of the oil price decline, specifically because their strong rivals have had to limit their shale oil production and therefore any long-term investment in this sector is faced with serious challenges.

The third group comprises companies that had managed to buy oil at low and even negative prices. For instance, the day oil prices turned negative will likely be remembered as the climax of the darkest period ever for the petroleum industry, but for one lucky trading house it was a lifetime opportunity.

While many rushed to liquidate positions and cover margins as the May contract neared expiration, BB Energy, a medium-sized trading house based in London, bought 250,000 barrels of the West Texas Intermediate crude futures for May delivery, according to a person with knowledge of the situation. The WTI contract closed at minus $37.63 on that day.

As the information is confidential and on the condition of being anonymous, a person said BB Energy had an edge: It was one of the few with available space to store oil. The opportunity for the trading to take delivery of the oil was a rare prize given the dearth of storage to hold plentiful supplies of oil across the country.

The volume they purchased was some 10% of the 2.43 million barrels that were ultimately delivered physically for May, according to Nymex.

It is unclear how much it paid for the barrels and if it’s still holding on to them or not. But the well-timed trade means BB Energy has emerged as one of the clear winners of the fallout in oil, which has roiled global markets and economies dependent on the liquid asset.

The fourth group comprises nations with onshore and offshore storage capacity. They seized on the moment to store as much oil as they could. According to official data, oil storage was the highest-demanded part of the energy market in recent months. In fact, low prices convinced many countries to fil their storage tanks in a bid to make more gains. Therefore, the countries with storage facilities made highest gains from oil prices and they managed to fill their energy strategic reserves.