The surprise attacks by the Yemeni Houthis on the oil giant Aramco-owned Abqaiq oil processing facilities and Khurais oil field in eastern Saudi Arabia left significant political and economic impacts at the regional and global levels. That caused a 5mb/d decline in Aramco’s oil output. The unprecedented attacks were interpreted as Yemen’s retaliation against the Saudi-led coalition’s war on Yemenis since 2015.

The Saudi-led collation has been targeting Yemeni people. The attacks on the Aramco facilities showed that many equations have changed.

Aramco Attack Messages
Aramco, a state-owned Saudi company, started out in 1933. It owns the world’s largest proven oil reserves. In terms of crude oil and natural gas reserve ownership, Aramco is one of the most valued companies in the world.

Aramco is protected by the most advanced defense and military systems due to its key role in global oil supply; however, Yemeni forces managed to strike a heavy blow at the Saudi oil facilities. This blow was so effective that it halved the Saudi oil production, forcing the country to become an importer of petroleum products.

Politically speaking, what happened in Aramco carried important message. First and foremost, the Yemeni army’s action in attacking the Saudi oil facilities proved that small actors could deal striking and telling blows. Second, unilateral aggression against a country with no defense forces would not end in a predetermined result. Third, in the current international system, the US is no longer able to provide full support for its traditional allies. Fourth, it would be impossible to exert pressure on other countries without expecting any response. Fifth, buying and accumulating military assets could not guarantee national security.

Saudi Arabia, spending $67.6 million on weapons purchase, is the third largest buyer of weapons in the world. Despite such military spending, the country is highly vulnerable. Therefore, merely buying advanced arms and enjoying super powers support could not ensure security for a country.

Impact on Global Markets
Economically speaking, what transpired Aramco was a rare event in energy exports. With a single attack, oil-rich Saudi Arabia’s oil exports were cut to half. What adds to the significance of such an event is that rebuilding the damaged oil facilities would take time. Even under suitable conditions, it would take months.

The question here is to know of the fate that would befall energy markets. Will the market recover from the shock caused by a 5mb/d decline in Saudi oil output or would it have to suffer the consequences of these attacks in coming months? Can a sudden increase in oil prices be managed by increased production from other nations or isn’t there any such capacity? Are oil producers willing to increase production to keep prices low or do they prefer to see oil prices rising?

Over recent months, international energy markets have been dealing with oil production surplus. Despite all measures undertaken by OPEC+ to freeze oil prices, the energy price has been following a steady state.

However, the attack on Aramco sent shockwaves through international energy markets. The impact of this shock went beyond market oil shortages, raising fears of an all-out war in the Persian Gulf region. In fact, fearing similar attacks on oil facilities in other countries significantly pushed up oil prices. That is while many oil producers are happy with high prices in global markets and show no inclination for any decline. Therefore, even if petrostates are able to increase their production they will not use such capacity in order to keep prices high.

What Next?
In light of conditions prevailing over global markets, predicting future developments would require taking into account several major issues as follows:

Second, Saudi Arabia has already announced the total value of Aramco’s assets at $2,000 billion, intending to earn $100 billion in revenue from floating 5% of the company’s shares on stock markets.

Now even if the Saudis manage to restore the pre-attacks production levels, Aramco’s assets would no longer become as valuable as they were. Such installations that have been attacked once and remain vulnerable are susceptible to be targeted again. Investors and stock buyers are less willing to invest in an insecure area which may be attacked at any time. That means lower investment in one of the most important oil facilities in the world. That is likely to also affect energy prices in the future.

Third, if Saudi Arabia does not halt its attacks on Yemen, the Aramco incident is likely to repeat itself. That would cut Saudi oil output and cause a new shock in the global markets.

Fourth, US policies in the region would bring about more insecurity and therefore oil prices would be affected. Any mistake by the US to trigger a conflict with Iran would engulf the entire region in a war. That would result in a reduction or full halt to oil exports from the Persian Gulf to global markets, in which case energy prices will increase sharply.

Therefore, should Saudi Arabia continue to attempt for engaging the US and Iran in a war and the White House make such a calculation mistake, global energy markets will see a new shock.

In general, global energy markets mainly depend on Saudi policies in the region. In case the Saudi government continues its belligerence it will be stuck in a widespread war which would destroy itself. Now, everyone is waiting to see whether or not Aramco would manage to get out of the unwanted conditions imposed on it by Saudi politicians. The response to this question lies in the hand of Saudi leaders. 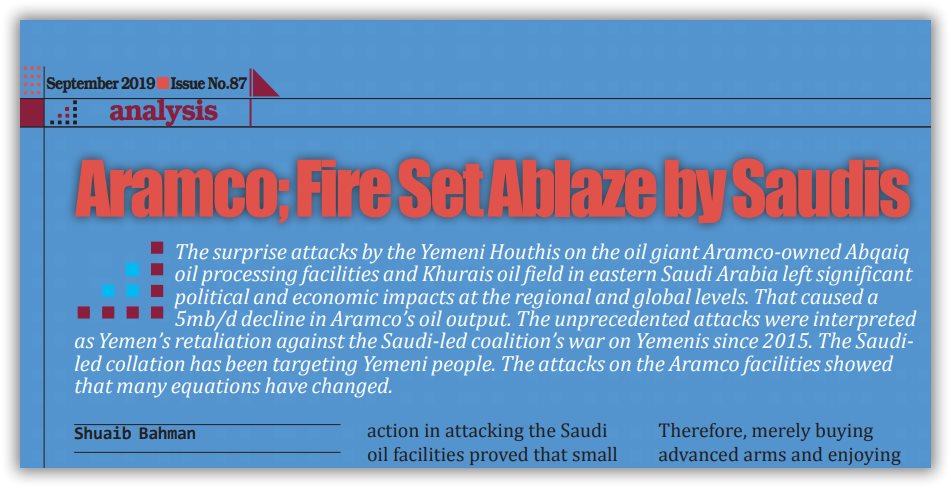