(Head at Institute for Strategic Researchers in the Contemporary World, Iran)

After the collapse of the Soviet Union, Central Asia has been cast as the site of a new “great game”. Central Asia has been largely influenced by international developments and the emergence of persistent sources of instability and tension in other parts of the world, including the Middle East and North Africa.

Some states in the region have succeeded in expanding their relationships with other actors. For example, Kazakhstan has tried to advance its goals by participating in important international issues and designing appropriate policies. Although Kazakhstan has succeeded in this path, most of the countries in the region face major challenges. At the moment, Central Asian states are facing serious menaces to their security from various challenges like drug trafficking, water disputes, religious fundamentalism and expansion of terrorist and Takfiri groups such as ISIS.

The war in Syria and Iraq has significantly altered modern terrorism, with radical Islamic militants from Central Asia being no exception. Most importantly, for the first time travelling outside of the region to fight in the ranks of militant and terrorist organisations became a mass phenomenon. In Syria, the radical Islamic militants from Central Asia have established terrorist organisations of their own. These terrorists have Salafi-Wahhabi inclinations and are among the backers of al-Qaeda, al-Nusra Front and Daesh Takfiri groups. They have turned into a potential threat for countries in the Central Asia as these international and organized terrorists may one day find their way to other regions and states after Syria.

Activities of extremist networks which send their members and devotees to Syria have a determining role in the region. Many of the foreign rebels operating in Syria had links to these groups in their own countries. A portion of them are being encouraged by their relatives and friends in Syria to join the ranks of the Takfiri militants, especially older brothers motivate the younger ones to join the terrorists.

The terrorists’ method for recruiting forces is almost the same in most of the countries in the Central Asia. They usually do this through local sources and Islamist groups and organizations that have close ties with al-Qaeda, Salafists and Wahhabists. However, this is not done openly.

A number of terrorist groups are tasked with recruiting individuals to send them to fight in Syria. In fact, all terrorist groups, including al-Qaeda and the al-Tahrir Party are busy with the recruitment. The Takfiri groups of al-Nusra Front and the so-called Islamic Jihad Union are also employing nationals from the Central Asia. In some countries, the process of the employment is done through indigenous people. For instance, one third of all Kyrgyz people who have travelled to Saudi Arabia in pursuance of religious education have turned into extremist Salafi-Wahhabi preachers in Kyrgyzstan. That is why today the Kyrgyz are employing their people to prevent this.

The Challenges of Combating Terrorism in Central Asia

Fighting terrorist threats in Central Asia is a complex issue. To counter these threats, Kazakhstan and other Central Asian governments have been reevaluating their national counter-terrorism strategies. Counter-terrorism cooperation under the Collective Security Treaty Organization and the Shanghai Cooperation Organization has its limits because not all the Central Asian governments are members of the organizations. Also these strategies have been mainly established to counter terrorism within the member states, not the ones stemming from other regions.

On the other hand, some external actors play a destructive role in improving the security situation in the region. Indeed none of the great powers are not serious fight against terrorism. At present, the security conditions of the region can be made more complicated for several reasons:

First, the spread of terrorism and extremist groups;
Second, U.S. competition to increase penetration;
Third, ISIS’s willingness to be present in the region;
Fourth, the presence of people from the countries of Central Asia, Afghanistan and Pakistan in the ranks of ISIS militants in Iraq and Syria.
Iran and Fighting Terrorism in Central Asia

The rising threats of extremism in Central Asia represent a strong menace for Iran interests. Due to the increasing presence of ISIS forces in Afghanistan, the security of Central Asia remains a top priority on the Iran security agenda. The Iran-Central Asia Strategy should include in its objectives the challenges of foreign fighters and radicalization, drug trafficking and organized crime, and conflicts that require cooperation between Central Asia and the Iran.

No one and no country can deny the constructive and positive role of Iran in fighting the scourge of terrorism in the region and the world. Iran’s efforts and assistance to regional countries have helped reign in the violence and bloodshed of ISIS terrorist group in various parts of the world by bringing the self-proclaimed statehood of ISIS to an end in Iraq and Syria. The Islamic Republic of Iran will continue to advocate dialogue, cooperation and trust among regional countries as the only viable way to end terrorism and devastating wars in the Middle East. In result no country would benefit from the weakening of Iran in the region.

In the past years Iran has acted as a buffer zone and has prevented the entry of terrorist groups from Middle East to Central Asia. Iran has always tried to fight with terrorist and Takfiri groups. Among foreign actors in the region Iran and Russia have a good cooperation in the fight against terrorism. They are winning the fight against terrorism in Syria. Undoubtedly Iran and Russia can offer their experience in combating terrorism to Central Asian countries.

No doubt, security, peace and respect for the sovereignty of countries, as well non-interference in their internal affairs, and an effective fight against terrorism,  without double standards, will be in the interest of all countries in the world.

Fight against Terrorism requires a holistic and coordinated approach. For the implementation of the international Counter Terrorism Strategy in Central Asia need a Regional Joint Action Plan. Integrating counter-terrorism strategy to political, economic and social development policies is an important part of the comprehensive approach.

In order to combat terrorism in Central Asia, there are a few issues to consider:

All States in region to combat terrorism must take coordinated action.
The fighting of  terrorism in Central Asia will not succeed without creating peace and stability in Afghanistan.
Combating terrorism requires the formation of a regional and international coalition between States that really have a concern for countering terrorism, not the countries that have been sponsors of terrorist groups.
The fight against terrorism requires the use of past experiences. In this regard Iran and Russia have a considerable experience to share in combating terrorism. 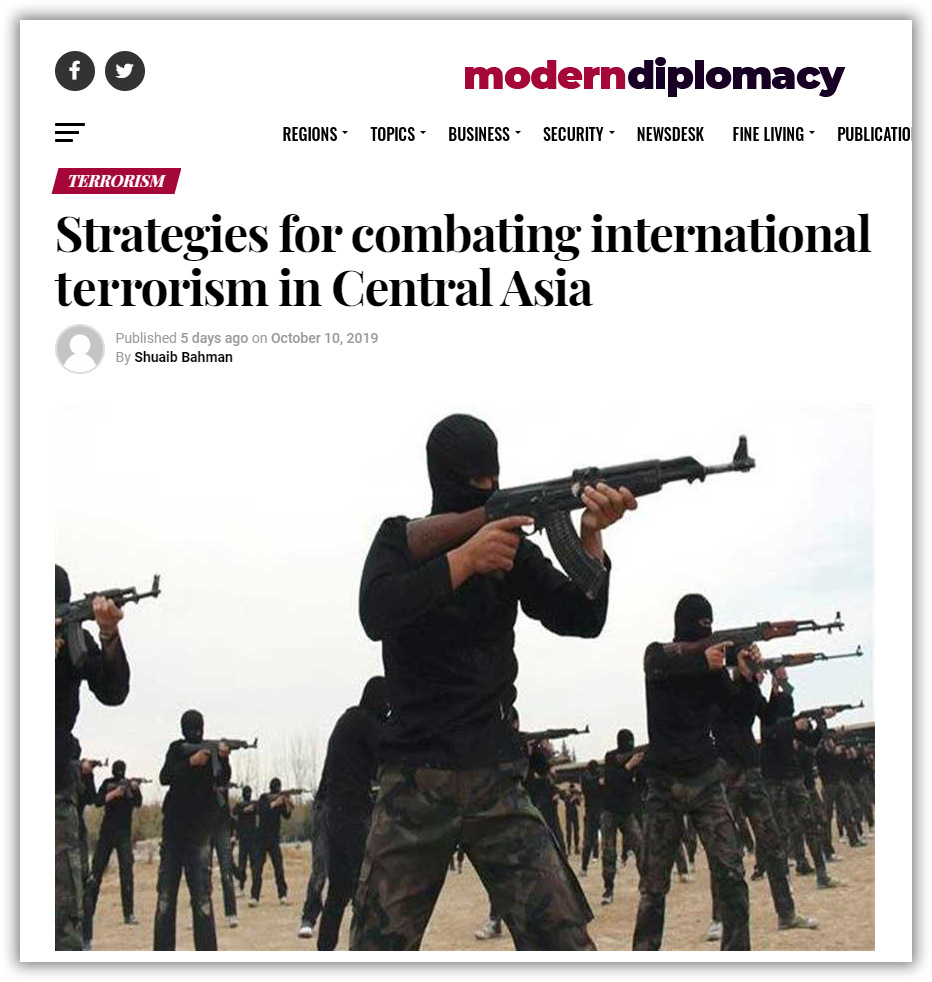 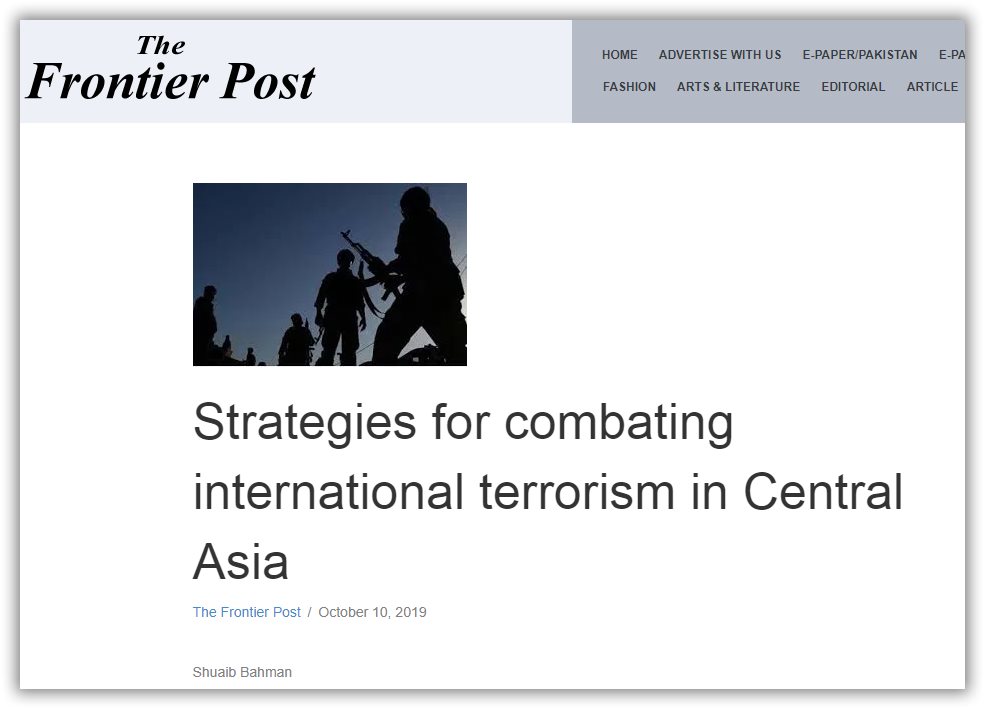