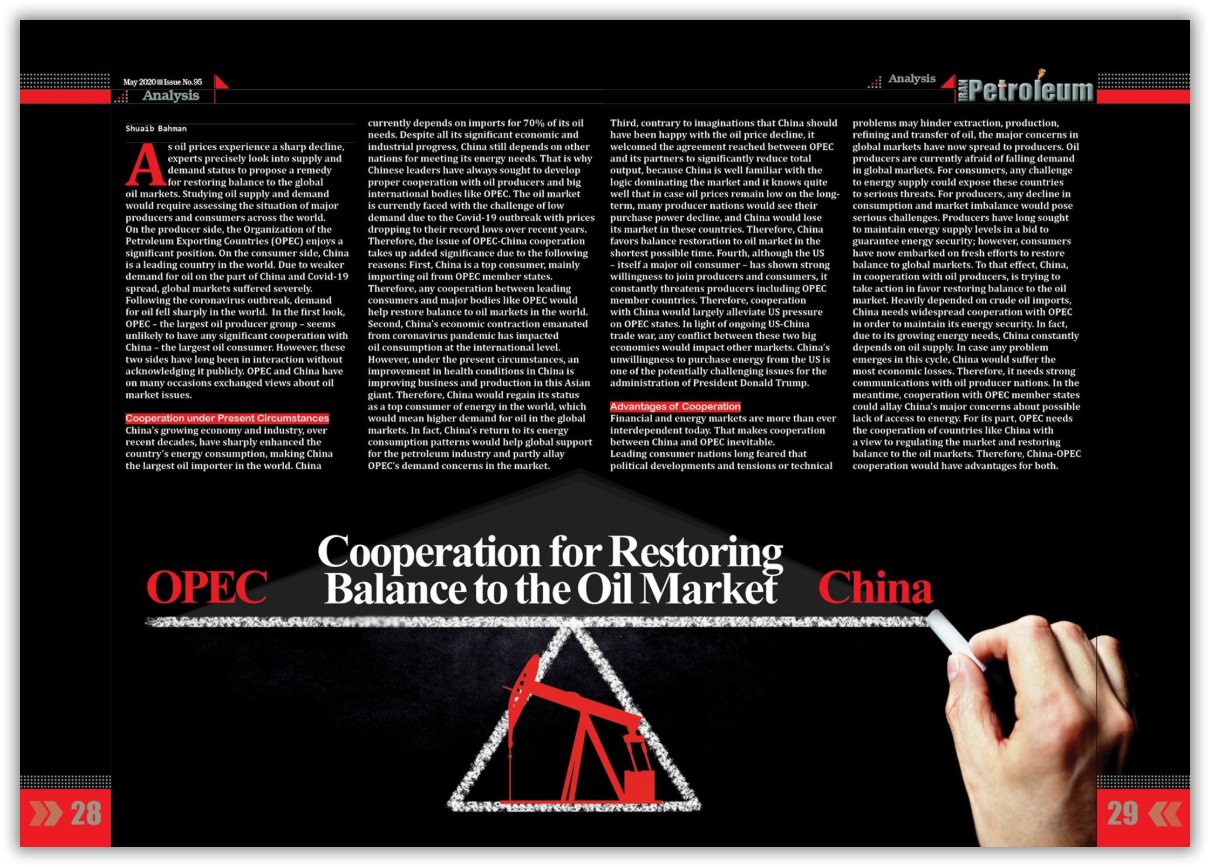 China & OPEC: Cooperation for Restoring Balance to the Oil Market

As oil prices experience a sharp decline, experts precisely look into supply and demand status to propose a remedy for restoring balance to the global oil markets. Studying oil supply and demand would require assessing the situation of major producers and consumers across the world.

On the producer side, the Organization of the Petroleum Exporting Countries (OPEC) enjoys a significant position. On the consumer side, China is a leading country in the world. Due to weaker demand for oil on the part of China and Covid-19 spread, global markets suffered severely. Following the coronavirus outbreak, demand for oil fell sharply in the world.

In the first look, OPEC – the largest oil producer group – seems unlikely to have any significant cooperation with China – the largest oil consumer. However, these two sides have long been in interaction without acknowledging it publicly. OPEC and China have on many occasions exchanged views about oil market issues.

China’s growing economy and industry, over recent decades, have sharply enhanced the country’s energy consumption, making China the largest oil importer in the world. China currently depends on imports for 70% of its oil needs. Despite all its significant economic and industrial progress, China still depends on other nations for meeting its energy needs. That is why Chinese leaders have always sought to develop proper cooperation with oil producers and big international bodies like OPEC.

The oil market is currently faced with the challenge of low demand due to the Covid-19 outbreak with prices dropping to their record lows over recent years. Therefore, the issue of OPEC-China cooperation takes up added significance due to the following reasons:

First, China is a top consumer, mainly importing oil from OPEC member states. Therefore, any cooperation between leading consumers and major bodies like OPEC would help restore balance to oil markets in the world.

Second, China’s economic contraction emanated from coronavirus pandemic has impacted oil consumption at the international level. However, under the present circumstances, an improvement in health conditions in China is improving business and production in this Asian giant. Therefore, China would regain its status as a top consumer of energy in the world, which would mean higher demand for oil in the global markets. In fact, China’s return to its energy consumption patterns would help global support for the petroleum industry and partly allay OPEC’s demand concerns in the market.

Third, contrary to imaginations that China should have been happy with the oil price decline, it welcomed the agreement reached between OPEC and its partners to significantly reduce total output, because China is well familiar with the logic dominating the market and it knows quite well that in case oil prices remain low on the long-term, many producer nations would see their purchase power decline, and China would lose its market in these countries. Therefore, China favors balance restoration to oil market in the shortest possible time.

Fourth, although the US – itself a major oil consumer – has shown strong willingness to join producers and consumers, it constantly threatens producers including OPEC member countries. Therefore, cooperation with China would largely alleviate US pressure on OPEC states.

In light of ongoing US-China trade war, any conflict between these two big economies would impact other markets. China’s unwillingness to purchase energy from the US is one of the potentially challenging issues for the administration of President Donald Trump.

Financial and energy markets are more than ever interdependent today. That makes cooperation between China and OPEC inevitable.

Leading consumer nations long feared that political developments and tensions or technical problems may hinder extraction, production, refining and transfer of oil, the major concerns in global markets have now spread to producers. Oil producers are currently afraid of falling demand in global markets. For consumers, any challenge to energy supply could expose these countries to serious threats. For producers, any decline in consumption and market imbalance would pose serious challenges.

Producers have long sought to maintain energy supply levels in a bid to guarantee energy security; however, consumers have now embarked on fresh efforts to restore balance to global markets. To that effect, China, in cooperation with oil producers, is trying to take action in favor restoring balance to the oil market.

Heavily depended on crude oil imports, China needs widespread cooperation with OPEC in order to maintain its energy security. In fact, due to its growing energy needs, China constantly depends on oil supply. In case any problem emerges in this cycle, China would suffer the most economic losses. Therefore, it needs strong communications with oil producer nations. In the meantime, cooperation with OPEC member states could allay China’s major concerns about possible lack of access to energy.

For its part, OPEC needs the cooperation of countries like China with a view to regulating the market and restoring balance to the oil markets. Therefore, China-OPEC cooperation would have advantages for both.