Over recent weeks, tensions have escalated in the Persian Gulf, more particularly in the Straitof Hormuz, a strategic lane for international oil shipment.

Four tankers were attacked in the United Arab Emirates’ Fujaira Port, two commercial vessels were reportedly targeted by mines in the Gulf of Oman, while a Britain-flagged tanker was seized by the Islamic Revolution Guards Corps Navy. The Persian Gulf region is now experiencing significant developments that would influence the future of global energy markets.

One week after that, the IRGC announced the downing of a US drone for violating Iran’s airspace. Two weeks later, a supertanker carrying Iranian crude oil was seized in Gibraltar and finally a British-flagged tanker was seized in Iranian waters.

The Persian Gulf last saw such tensions during the Iraq-Iran War when the so-called Tanker War happened.

However, so far the global oil market dynamics have been moving towards lower impact by political and security tension on the prices. Even the impact of these shocks on prices has been short-lived. But recurrence of tense events in the Persian Gulf in the future could drive oil prices up. The International Energy Agency (IEA) has warned against a sudden growth in oil prices should Persian Gulf tensions notch up. Oilprice has also warned against the consequences of ongoing tensions, saying any military confrontation in the Persian Gulf may push oil prices up to $325 a barrel.

Although current tensions in the Persian Gulf have not caused any jump in the oil prices, they will indirectly affect the future of energy transfer from this region.

For example, a significant increase in the insurance premium of oil tankers crossing the Persian Gulf would increase energy transmission prices, while reducing the activity of oil companies. Any increase in energy transfer costs will cut the profits of these companies. Should it continue, it will affect global economic growth and development in the future.

US, Main Culprit
Due to the failure of the US policy aimed at attempting to zero Iran’s oil exports,oil prices did not jump significantly following the recent unprecedented tensions in the Persian Gulf.

Iran has managed to blunt the impact of US sanctions and prevented any void in global markets. That is while in case Iran’s oil vacuum was coupled with the Persian Gulf insecurity in global markets, prices would experience a significant jump.

Therefore, despite claims by senior US officials who have accused Iran of stoking up tensions in a bid to push up global price, Tehran would not need tensions. But the US failure to zero Iran’s oil exports could provide a better reason for Washington to be resorting to sabotage in order to utter false accusations against Tehran and push Iran further into isolation.

The adoption of this policy by Washington may increase the costs of all nations. For instance, ongoing tensions in the Persian Gulf have once again pushed to bold relief the security of energy transfer across the world. Some European countries are now seeking to set up a joint taskforce to protect vessels. If Europe launches its maritime security taskforce, it would not guarantee energy security and would even boost the possibility of tensions. In such case, one can no longer be optimistic about keeping energy prices in check in global markets.

Therefore, insecurity in the transportation of energy through the Persian Gulf stems from the US policy rather than that of Iran or regional countries. The US’s pullout from the 2015 Iran nuclear deal and the re-imposition of unilateral sanctions on Iran and efforts to reduce Iran’s oil exports to zero are among such destructive actions that stir up insecurity in the Persian Gulf. Therefore, should energy consumers want to know who to blame for ongoing tensions in the region, they should point their fingers at the US. Before Washington embarked on its anti-Iran moves by imposing sanctions, the Persian Gulf did not witness such tensions. 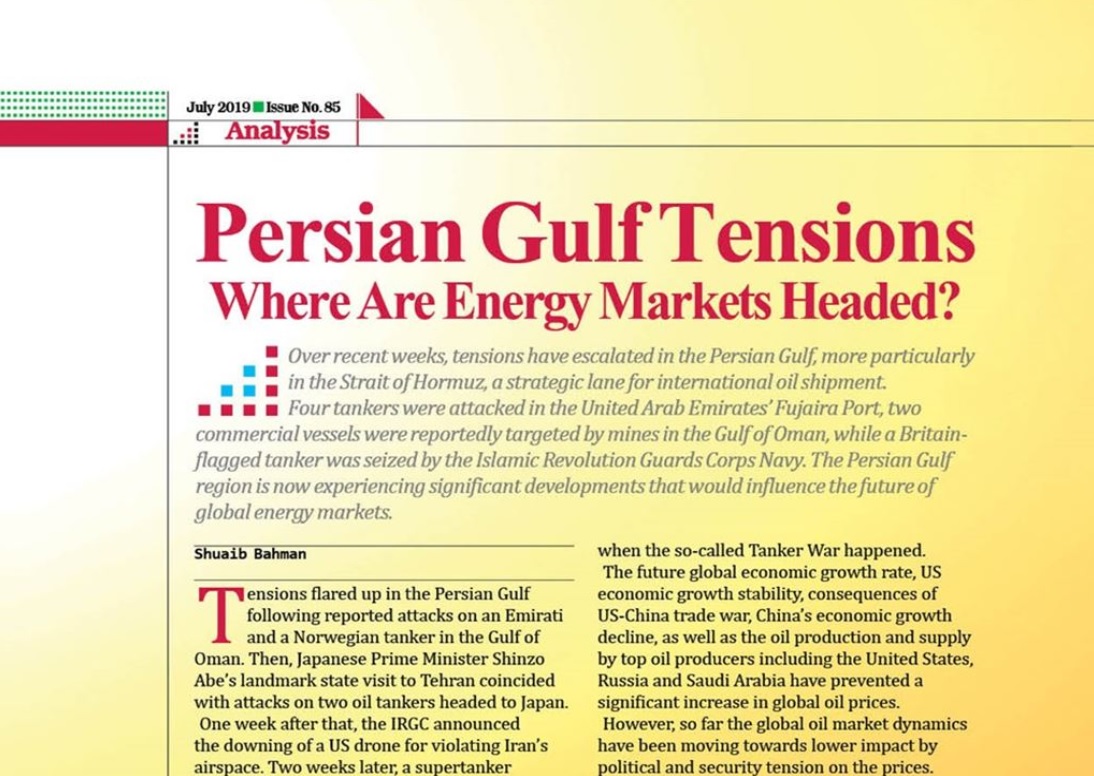